Mausritter is an RPG by Isaac Williams where you are adventuring mice. It's super-cute and packs a lot of tools into its 24 pages. The system is mostly based on Into the Odd, with additional mechanics taken from Knave and the Goblin Punch blog, and layout/usability ideas from Mothership and the Last Gasp Grimoire blog. Isaac also cites Mouse Guard and Mice & Mystics for theme and tone.

The game has a recommended price of US$3, which is more than fair, but if that's a financial burden, the author's set no minimum price.

Adventuring mice is not a new RPG theme, and if you broaden it to other small woodland animals, Bunnies & Burrows is nearly as old as D&D itself. So let's look at what sets Mausritter apart, and why I like it?

Rolling Up a Character

Making a character is simple and mostly random. The author has also provided a one-click online generator. Your starting equipment is determined for you in a way similar to Into the Odd, so you can get straight to the adventure.

You have three Ability Scores: Strength, Dexterity, and Will. For each score in order, roll 3d6 and drop the lowest die. You can then swap two scores.

This method produces scores in the following distribution, in case you want to houserule ability score arrays or point-buy. I like random chargen, but if a player hated it I'd let them take 7, 9, 10 (the three quartile points of the distribution) in any order.

You then roll on tables for:

Only a couple of entries on these tables give any obvious fictional advantage, so again, while randomly rolling on them is fun, letting players choose should be OK.

You then roll 1d6 for starting HP and starting Pips. HP is your capacity to avoid harm. Once it's depleted, damage goes onto one of your ability scores (typically STR). So an HP of 1 is less disastrous than in, say, B/X, but still scary.

You then cross reference your HP and Pips against a table to determine your Background, with gives you starting equipment. Like ItO, worse HP & pip rolls mean you start with better stuff. If you have bad/mediocre ability scores, you then roll on the table as well.

e.g. a mouse whose highest ability score is 8, and who starts with 1 HP and 2 Pips, was a kitchen forager before becoming an adventurer. They start with a shield & jerkin, cookpots, plus what all mice start with: torches, rations, and weapon of your choice. Because their highest ability score is 8, I roll again on the background table and choose one of the items it gives me. I roll (1, 4), and start with a healing spell from the Hedge witch background. Maybe I nicked it off them?

Unlike Into the Odd, the worse equipment given to characters who roll better doesn't include any negative entries like "debt" or "a missing arm". Just less obviously useful stuff like a felt hat.

And that's it! No complicated class features -- if you have a spell you'll need to quickly look over what it does, but the spellcasting rules are pretty simple too.

Yes, this means an average mouse will fail 55% of rolls, and the most gifted starting mouse will still fail 40% of rolls. Like many OSR games, if you have to roll at all, you've generally made a mistake or are in a desperate situation. I'll quote from the game,

When you describe your mouse doing something risky where the outcome is uncertain and failure has consequences, the GM will ask you to make a save against one of these ability scores.

You'll also have to roll saves to see if you're affected by a spell -- i.e. the risk isn't always player-directed, it be something the character is subjected to like modern D&D's understanding of a saving throw -- but the point still stands. Make a plan that's clever enough, and that accounts for the dangers the GM should be telegraphing to you, and you succeed without having to roll.

Equipment is recovered from adventure sites or bought/sold in mouse settlements. The inside-front-cover is a table of gear for sale in pips, the "standard currency of the mouse kingdom". Stuff for sale is your standard D&Dish nonmagical gear and dungeoncrawling tools, rethemed for mouse-sized characters. Notably the adventuring gear is divided into mouse-made and human-made categories. The latter is only available in mouse settlements near where humans live.

Then we get to the How to Play section. A quick summary of old-school player principles, then the core mechanics. Again, rolling dice is dangerous -- scheme with other mice to make plans that avoid rolling.

Attacks always hit. The attacker simply rolls weapon damage and subtracts it from the target's HP. Once that's gone, damage is applied to their Str score.

Weapon damage has no ability score modifiers. Damage dice range from d6 for small weapons to d10 for heavy weapons.

Since there's no to-hit roll, advantage/disadvantage doesn't apply here. Attacks that are impaired (e.g. firing into cover) always deal 1d4 damage, attacks that are enhanced (e.g. a backstab) always deal 1d12. You could houserule that the attacker instead rolls their normal damage die twice, taking the best/worst. I'm not sure why the author chose to do it this way.

Wearing armour (whether light or heavy) subtracts 1 from any incoming damage.

If damage reduces your Str score to 0, you die immediately. Otherwise, if an attack deals Str damage to you, you then make an Str save (using your now-reduced score). If you fail, you are knocked out and take the Injured condition. If you aren't tended to in 6 turns, you die.

Note "6 turns" here means the old-school "dungeon turn" of ~10 minutes. So if you take a wound, e.g. while exploring ahead on your own, you can survive an hour without treatment.

A short rest (one turn or 10 minutes) restores 1d6+1 HP. A long rest (one watch or 6 hours) restores all HP, or 1d6 to a damaged ability score if your HP is already full. A week's rest in safety clears all damage and most conditions. There is a healing spell, if you're lucky enough to have it.

Since you have no class features, your abilities come down to creative use of what you carry.

Each character has an inventory with 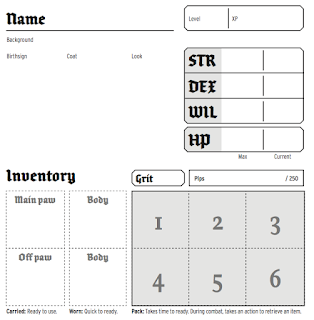 You can carry more stuff than you have slots, but this leaves you encumbered.

You get these cute item cards to place in your slots: 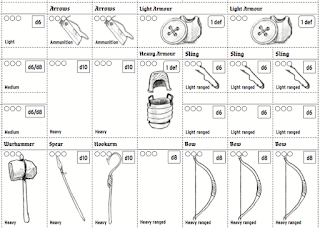 The card geometry is important! e.g. light and heavy armour provide the same defense, but light armour takes up your off-paw slot and one body slot, while heavy armour takes both your body slots. It's unclear whether you can rotate cards 90 degrees to fit sideways in your pack.

Importantly, conditions you might receive, like Hungry or Frightened, are also represented as cards that take up a slot. Hungry actually has no innate effect besides taking up a slot -- as you continue to go without food, you take more Hungry cards that further lower your carrying capacity.

Note that various item cards have three little dots to mark usage. This is a game that prioritises item bookkeeping instead of class features, but it tries to make that bookkeeping as easy as possible. Rations mark a dot whenever you eat a meal, torches every few dungeon turns. Ammunition is tested once after each fight, with a 3-in-6 chance of marking a dot. Spells also have dots, but work a bit differently.

You can store gear and your savings at a bank in any decent-size mouse settlement. Mice in settlements also generally deal in barter and IOUs rather than using pips for every transaction.

Even though the game is classless, there are levels. Leveling up is really quick and can be done in a minute in the middle of a session, but doesn't give you anything beyond some extra resilience and maybe improved ability scores. You progress more or less linearly up to 4th level, with only slow improvement beyond that.

You get XP for:

When you level up, you:

Like in Knave, each spell is represented by a physical item taking up an inventory slot. Spells (beyond any you start with) must generally be recovered as treasure or stolen. Though since they can be sold, presumably you can sometimes buy them?

Spells have three usage dots. When you cast a spell, you choose how much power to cast it with, up to the number of unmarked dots. Roll that many d6 to determine effect. Higher rolls are a stronger effect, but will also cause dots to be marked, or cause you to take Will damage.

Each spell has a unique ritual that must be conducted to coax the spirit back into the item and clear usage dots. e.g. Ghost Beetle (a spell similar to Tenser's Floating Disc) is recharged by burying the spell tablet in a beetle graveyard for three nights.

This is a really cool alternative to the level-less Vancian system that Knave uses for its spells, particularly if you like magic to carry some risk.

The GMing section has some standard OSR principles: let players find their own adventure, present the world honestly, telegraph danger, be an impartial arbiter, reward bravery. It also tells you to make the world seem huge -- they characters are mice!

It then suggests a few tools, like an X-in-6 roll for luck-based events outside the characters' control, various possible consequences for failing a save (besides damage), weather tables, random encounter rolls, reaction and morale rules, all the usual old-school stuff.

NPC creatures have ability scores similar to player characters, probably a special power or two. Each also has a 1d6 table unique to that creature, e.g. NPC mice have 1d6 Rival Mouse Adventurers, Ghosts have 1d6 Ghostly Powers, Faeries have a list of 1d6 Agendas. I love this idea, it really emphasises how these creatures are intended to be used.

Then there's instructions for creating a hexcrawl, with a prepopulated example so you can start playing immediately.

The rest of the book is a bunch of random tables for hex contents, landmarks, mouse settlement details, adventure sites and their denizens, adventure seeds, and NPC mice.

The last page is a quick reference sheet summarising basic mechanics and the rules for resting and spellcasting.

a Mouse Matriach's home is under attack, the antagonist is very drunk.

Why This Game May Not Be Your Cup of Tea

The OSR has a bit of a reputation for producing rehashes of OD&D/BX and/or Keep on the Borderlands, and edgelord "body-horror lair of the tiddy-hydra" stuff. So it can be hard to draw outsiders' attention to great work that they might enjoy. Mausritter is one of the games I will now point to as an example of what the OSR is capable of.

Email ThisBlogThis!Share to TwitterShare to FacebookShare to Pinterest
Labels: into the odd, knave, osr, review

hi! all comments are moderated (mostly for spam) before they're published. 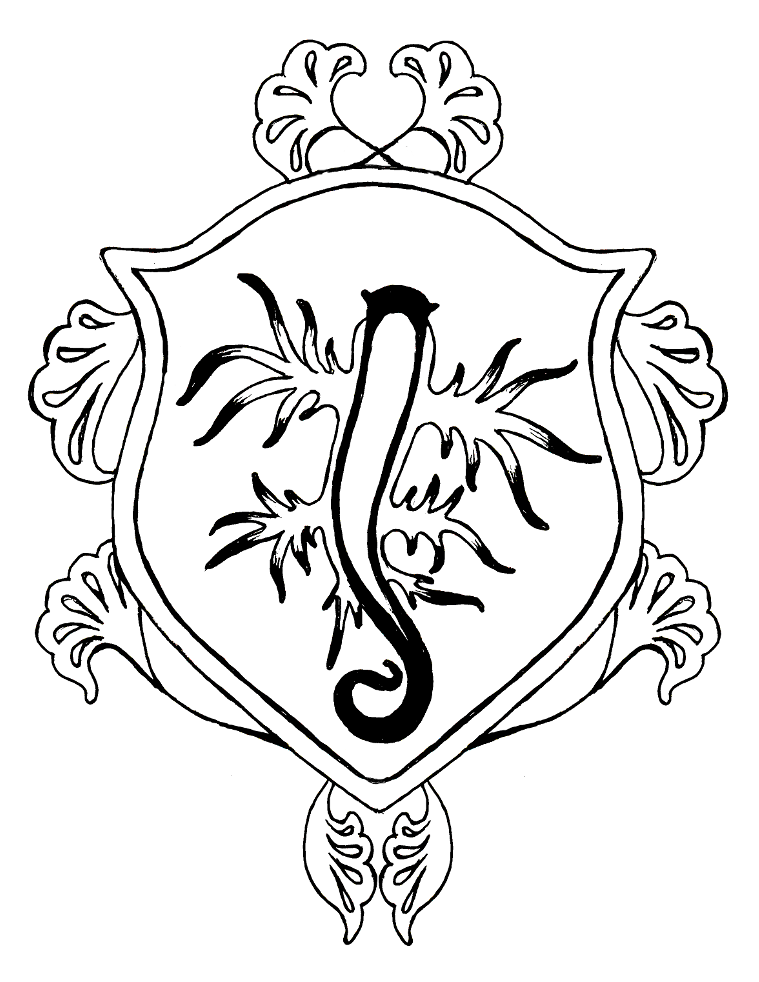 I live on twitter.
You can find stuff I've published on itch.io 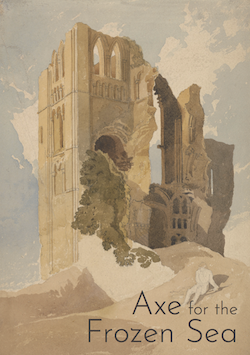 A simple d10-based ruleset for when dice are infeasible, and a collection of random tables